Each of the nine numbers in the name diagram has a varied number of circles around them, including none at all. Energy flows from numbers with more circles to those with fewer circles. The direction of energy is illustrated by an arrow. It flows from a dominant number to a subordinate one.
Where two or more numbers touch on each other as nearest neighbors (for example (1) (2), (2) (3), (1) (2) (3), and so on), and have the same quantity of circles around them, then the energy from these numbers intermingles: it flows both ways. This is illustrated by a double headed arrow.
In the name Norman Mortimer Shine this is demonstrated by the numbers (5) and (9). Both of these numbers have five circles, so that inherited talents (9) and the urge to expand (5) combine and strengthen each other. These two numbers, (5) and (9), dominate the name diagram - energy flows from them to all the other numbers in the diagram as they all have fewer circles around them.
It should be realized, however, that everyone possesses the energy of all the numbers - in the same way that every horoscope has all the planets present. The variation comes from those energies of which we are consciously aware and from those which we are only aware of in our subconscious minds.

Number Lines
The grid of key words shows how the numbers are arranged, according to an ancient principle, that of 'the three worlds.' This term also appears in graphology and palmistry. 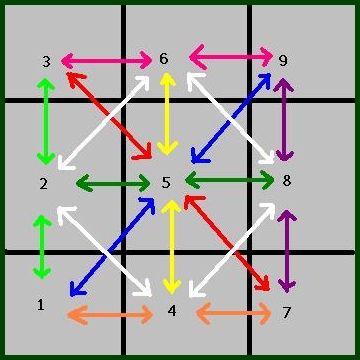 The numbers on the grid can be arranged in eight lines of energy, each consisting three numbers. The lines are horizontal, vertical or transverse. There are also four short lines, each consisting of two numbers.

Vertical Lines
The numbers can be grouped so that they form three vertical parallel lines.

(1)-(2)-(3) : These numbers describe the world of the physical body. Here individuals can be seen as physical beings capable of knowing their identity (1), able to feel with the conscious mind (2) and to perform actions (3).

(4)-(5)-(6) : These numbers describe the world of the intellect. This category of energy is an expression of logical thoughts or instincts (4), the senses (5) and the higher abstract intellect capable of imagination, theory and creative thought (6).

(7)-(8)-(9) : These numbers describe the world of the spirit stretching from the limits of the material world (7) via the transformative powers of the unconscious mind (8) to the spiritually creative awareness of our innate talents (9).

(1)-(4)-(7) : These numbers symbolize the earthbound world of material reality: the individual seen as a physical being (1), equipped with a logical intellect (4) and bound by the limitations of matter (7).

Diagonal Lines
There are two other energy complexes formed from the lines connecting to following numbers:

(1)-(5)-(9) : These numbers connect to give a transverse energy line linking awareness of personal identity (1) via the senses (5) to awareness of innate talents (9). Energy flows through all three levels (material, mind and creative) and all three worlds (physical, intellectual and spiritual).

(3)-(5)-(7) : These numbers connect to give a transverse line of energy that also links up the three levels of creativity (3), mind (5) and the material (7) through the three worlds.