A name may be seen as a whole, but is best seen in its parts first. The name diagram here is for Norman Mortimer Shine, illustrates how we do this. The numbers are first to be seen as energy sources. A circle is drawn around a number each time that a number occurs in the name. This is where a first assessment is made of the strengths and weaknesses of the name. We can see which numbers are dominant, which numbers are subordinate - and also which numbers are absent from the diagram.
At this point do not consider what is missing, just concentrate on the energy present. The numbers with circles around them are sources of energy used consciously to a greater or lesser extent, according to the frequency of the number in the name.
The more circles there are around a number, the higher the level of awareness of the energy symbolized by that number. The fewer circles around a number, the lower the awareness of the energy symbolized by that number. If you are not aware of something you cannot control it. If you cannot control something, it controls you. Increased awareness allows greater control. When you make a name diagram of your own name, you will see areas of energy in which you can improve your awareness.
Norman Mortimer Shine

This example shows the hierarchy of awareness of the numbers apparent in the name diagram. 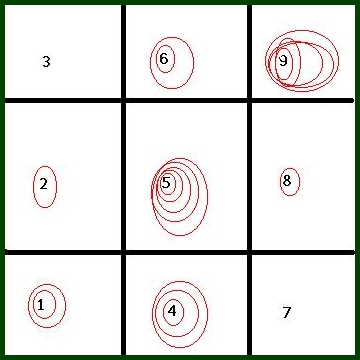 The following numbers are dominant: (9) - talents (inherited and innate), karma, love, spiritual creativity: and (5) - senses (expansion and desire to learn). These numbers occur most often in the name (both occurred five times) and could be said to dominate the diagram.
The following number is important: (4) - logical sense of practicalities, instincts and the concrete. This number occurs three times and it is of next importance to the dominate numbers above.
The following numbers are subordinate: (6) - imagination and theory, intellectual creativity and abstract thinking: (1) - personal resources, being and ego. These numbers both occur twice and they are third ranking in importance.
The following numbers are weak: (2) - conscious mind and feelings or emotions, duality, and either/or; (8) - unconscious mind and sense of eternity, transformation of the material, timeless space, infinity, both/and, and dharma. Both these numbers occur once only in the name and are of the lowest order of awareness.
The numbers (3) and (7) are not represented in the name diagram. They represent areas of energy of which the person was unconscious of when they were given their name. Personal creativity (3) and setting of limits (7) are areas that this person has to learn to control consciously.
It might be added here that the small amounts of (2) and (8) are nothing to write home about! They are only represented by a single circle around each one. Awareness of the energy in these two numbers will take them longer time to develop. Much effort will be needed to tame the energy represented by these numbers.