Edited On:
Not Listed 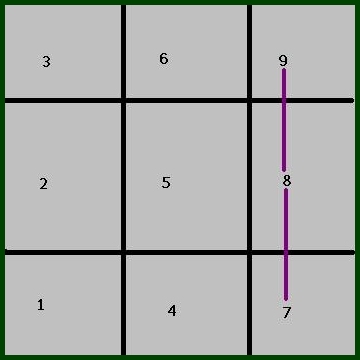 A strong (7)-(8)-(9) line indicates that the person concerned possesses strong spiritual resources that have their roots in self-discipline, a sense of fate (and contact with the unconscious mind), and awareness of innate talents. This line reflects the degree to which the individual concerned has access to his or her unconscious mind. A weak line throw the emphasis on the body or intellect.
This line points to the awareness a person has of the role of non-physical and non-intellectual energy. It describes the sense the individual has of the limitations of material reality, the necessity of being in contact with the unconscious forces of the mind and an awareness of inherited talents - the reward of earlier lives.
The spiritual line is also far from irrelevant to the present life of the individual. Without an awareness of the spiritual dimension, the person remains tied to the body - believing himself or herself to be the body, rather than knowing that the body is lived in by the soul. This lack of perception leaves the individual at the mercy of the whims and shifts of the body, mind and intellect. The strength of the spiritual line covers the widest spectrum - from awareness of limits of materiality to an awareness of the presence of the immortal soul, an awareness of innate talents.
The three focal points on this line are the numbers (7), (8) and (9). Together these three forms of energy combine to express the spiritual awareness of the individual and illustrate his or her ability to cope with the natural changes of the material world, on the basis of an acceptance that material reality is limited and that only spiritual reality, freed from the limitations of time and space, is absolute. Where this line dominates, we see to what extent the individual is aware of being, other than body and intellect. The sense of spiritual being is dominate.

-7-
The energy has a positive focus on awareness of the limitations of materiality - a sense of time. This serves as a steppingstone to something more valuable. Key words here include inner wisdom, philosophy and a realistic sense of the material. The negative focus is on ignorance, sarcasm, skepticism and pessimism, and censorship.

-8-
Whereas number (2) is the channel of the conscious mind, the positive energy here is focused on the massive resources of the unconscious which control us from below. Awareness of these unconscious resources enables the individual to maximize fate (the unconscious program of a lifetime) so that the person is in control of his or her life, fully responsible for the fact that he or she is alive. Key words include executive power, success and material freedom (no longer bedeviled by time). The negative focus is on greed, abuse of power, vindictiveness and manipulation.

-9-
The energy has a positive focus on an awareness of spiritual creativity, of the sum of all innate and inherited talents. Energy is focused on the very reason for having been born into this present life. This energy is universal, in that it is furthest removed from personal ego resources. Key words include universality, completion, accomplishment and compassion. The negative focus is on impracticability, wastefulness, bitterness and self-destruction.